"Sooner or later she'll see them, then everything will be different."
Add to Watchlist

The Others is a 2001 film written and directed by Alejandro Amenabar and stars Nicole Kidman. Kidman plays Grace Stewart a mother who lives with her two kids in a house out in the middle of no where during the time right after World Ware 2. The two kids, Anne and younger brother Nicholas, have a weird disease called xeroderma pigmentosa which makes them super sensitive to sunlight. Because of the weird disease their lives are pretty structured so that they aren't exposed to sunlight.

After three servants arrive at the house many strange things begin to happen. Anne begins talking about seeing a little boy in the house and gets in trouble with her mom for talking about and believing in ghosts.

Through out the movie Anne makes references to "what happened that day" and is hushed by her brother. Anne continues to speak of the little boy she has seen and soon begins to speak of others as well, including an old women. Grace, fed up with the 'pranks' that Anne is playing, makes Anne read from the Bible for several days.

Soon Grace begins to hear noises and notice strange things happening throughout the house. She then leaves the house to go into town to try and find a priest to bless the house. When she is leaving she runs into her husband coming up the driveway. Having thought that he had been killed in the war she forgets her task and escorts him into the house. Her husband acts weird for the short time he is there and then begins insisting that he must return to battle. Grace tries to tell him that the war is over and he insists "it is never over for me." After a night of intimacy Grace awakes to find that her husband has disappeared.

Soon we learn maybe things are not as we thought. Grace and the children learn that the servants that they have let into their home have gravestones in the cemetery.

After a climatic turn of events we learn that the real spooks in the house are none other then Grace, Anne and Nicholas and the event that Anne makes reference to through out the movie is in fact their death.

The Others is an Horror, Drama, Mystery, Thriller movie that was released in 2001 and has a run time of 1 hr 44 min. It has received moderate reviews from critics and viewers, who have given it an IMDb score of 7.6 and a MetaScore of 74.

The Others is available to watch and stream, download, buy on demand at Amazon Prime, Hulu, The Roku Channel, HBO GO, Amazon, Vudu, Google Play, iTunes, YouTube VOD online. Some platforms allow you to rent The Others for a limited time or purchase the movie and download it to your device.

Browse CBS!
Browse the latest CBS from with Yidio!
Browse Now
What are you waiting for?
Click here to try for free!
Do you have CBS?
No
Yes
Ad
i
Watch All of 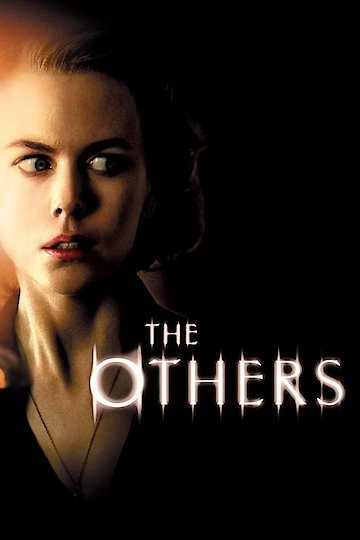 HBO Subscribers on The Roku Channel

Before I Go to Sleep

God Grew Tired of Us

In the Region of Ice

Browse CBS!
Browse the latest CBS from with Yidio!
Browse Now
What are you waiting for?
Click here to try for free!
Do you have CBS?
No
Yes
i
Not all titles featured on Yidio are available through CBS.
No thanks, I'm not interested in CBS