"From the Dark Side to Our Side."
Add to Watchlist

Released in 2004, Hellboy is an action-fiction movie based on a famous comic book with the same name that was written and drawn by an established artist, Mike Mignola. The movie stars Ron Perlman and Selma Blair. The movie's production budget amounted to $66 million while the gross earnings summed up to $99,300,000. Hellboy runs approximately 122 minutes.

The storyline begins in 19th century Germany where a group of Nazi shamans and devil worshipers open a portal that gives the underworld access to Earth. Led by a Russian occultist named Grigori Rasputin, the group intends to summon the Ogdru Jahad into the world to help them defeat their foes in war.

An allied team is dispatched to stop them and destroy the portal before it can release the imprisoned behemoth. The allied team alongside a doctor/researcher named Trevor Bruttenholm succeeds in stopping the Nazi group. In the process of destroying the portal, Rasputin is sucked into the dimension he tries to open while the others in their group manage to flee. With the portal being opened for a short period of time, a baby demon with a stone right hand is found in a nearby building. Doctor Bruttenholm approaches the baby demon who is, at first, frightened of the humans. The doctor gives him some chocolate and is able to lure him out of hiding.

With red colored skin, a pair of undeveloped horns, and a devil-like tail, Bruttenholm names it Hellboy. The movie then skips several years of Hellboy's life and flashes silhouettes of newspaper articles and pictures of the creature, depicting his growth into an adult. 60 years past, an FBI agent named John Myers is assigned to the Bureau of Paranormal Research and Defense. Entering the facility, he finds himself face to face with the grown up Hellboy and another extraterrestrial named Abe Sapien, who has amphibious characteristics.

The movie also shows Hellboy's love interest and a former agent for the Bureau, Liz Sherman. Liz is currently confined at the mental hospital to protect others from her destructive powers.

Hellboy is an Fantasy, Action movie that was released in 2004 and has a run time of 2 hr 2 min. It has received moderate reviews from critics and viewers, who have given it an IMDb score of 6.8 and a MetaScore of 72.

Hellboy is available to watch and stream, download, buy on demand at Amazon Prime, Apple TV+, The Roku Channel, Starz, Amazon, Vudu, Google Play, iTunes, YouTube VOD online. Some platforms allow you to rent Hellboy for a limited time or purchase the movie and download it to your device.

Browse Amazon Prime!
Browse the latest Amazon Prime from with Yidio!
Browse Now
What are you waiting for?
Click here to try for free!
Do you have Starz?
No
Yes
Ad
i
Watch All of

Pirates of the Caribbean: The Curse of the Black Pearl 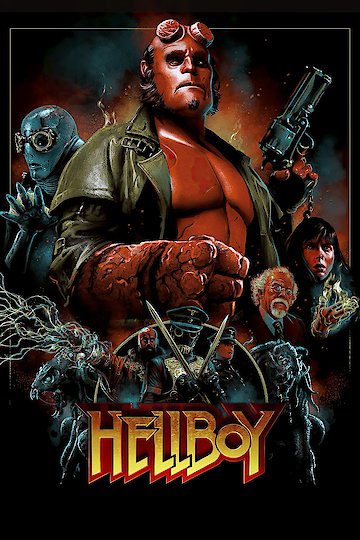 The City of Lost Children

Westside vs the World

Hell On The Border

All the Little Animals